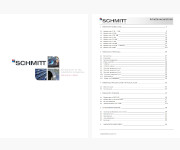 Quality has tradition: The future of Schmitt Stahlbau began in Gelsenkirchen in 1927 with the founding of the company as a metal works by Otto Schmitt Senior. At the beginning mainly railings and stairs were produced. In the 1950s more industrial customers purchased from the company and for good reason. Quality was, of course, already part of the company’s philosophy at that time. The reputation for positive experiences quickly got around in the industry on the Rhine and Ruhr. This meant that the signs pointed to growth: Surfaces were extended and other products were developed, production areas extended, new technologies introduced and specialized employees taken on.

Today, the family-owned enterprise is in transition to the third generation, and with their team is one of the “leading companies” in the areas of industrial pipeline construction, apparatus and container construction and special constructions. Components of Schmitt Stahlbau can be found in regional waste incineration plants, as well as in power stations in India and Brazil.